In this gorgeous film, narrated by David Attenborough, Tait is a painted wolf, matriarch of one of the last great families of this endangered animal. She has ruled her dynasty for many years on the banks of the Zambezi River in Zimbabwe, keeping the peace within her sprawling family. But tensions are rising, Tait is growing old and her power is waning. One of her daughters, Blacktip, lives close by. Her own pack is growing fast and they are running out of space. There is only one way Blacktip can get what she needs – by doing battle for her own mother’s lands.

Raise awareness for painted wolf conservation efforts and consider donating to organizations that are working to save this endangered species. 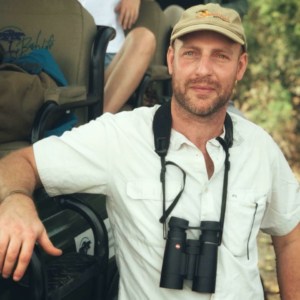 Nick Lyon began his career as a grassroots, undercover filmmaker working in human rights and animal justice, working alongside organizations such as Greenpeace, Friends of the Earth and Oxfam. Having made around 10 Indonesian language films surrounding subjects of palm oil, illegal logging, animal trafficking and indigenous rights, Nick finally got commissioned by the BBC to make a Natural World and six-part series about gibbon conservation.

Since then Nick has worked on landmark wildlife documentary. His greatest love is spending extended periods of time with individual animals to build up trust. Dynasties: Painted Wolf took this to a new level with 11 trips to Zimbabwe, tracking the lives of two related packs – and following individuals from a young age all the way up to becoming alpha of the pack.

Nick continues to be involved with the conservation of this species, and he’s currently exploring collaborations with other environmentalist artists to keep this, highly endangered and incredibly underrepresented, animal in the public spotlight.