The inland waters of the Pacific Northwest play host to some of the world’s most spectacular wildlife, including the killer whale. But this is no paradise for the ocean’s top predator, and below the surface, a disturbing scene is unfolding. Following a series of tragic deaths, the Southern Resident Killer Whales go missing. Two of their biggest advocates take to the seas, determined to find the pod and on a mission to protect them.

Read this article from The Guardian, which describes the Lummi tribe’s efforts to save the orca populations that are dwindling. 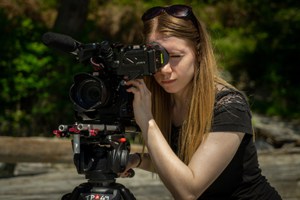 Jess Webster is an up and coming wildlife filmmaker with a Zoology degree.  After graduating, she worked in conservation, undertaking a research internship at the Zoological Society of London. Jess is now turning her attention to the art of film as a means of telling important stories about the natural world and has recently completed the University of The West of England’s prestigious BBC partnered MA in Wildlife Filmmaking. Now working at BBC Natural History Unit in Bristol.

The Sound of a Wild Snail Eating
Scroll to top