Drawing on Dante’s “Divine Comedy,” this story is a journey from Purgatory into Paradise, a quest for truth, for the soul of Botswana’s Okavango river. Floods rise up and transport trillions of liters of water and each droplet makes a difference. There are characters like Feeketsa, a wounded lioness that makes it against all odds and becomes a talisman for the tale, a symbol of hope through hardship. Like looking through windows and then moving on, the film reveals that each story binds us to the next and to the river herself.

Learn about the pandemic impact
of eco-tourism and how you can
help support rangers. 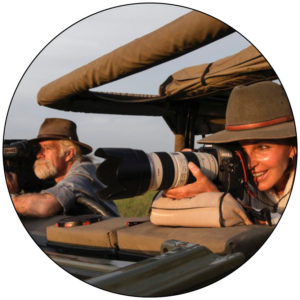 Dereck and Beverly Joubert are award-winning filmmakers, National Geographic Explorers-in-Residence and wildlife conservationists who have been filming, researching, and exploring Africa for over 30 years. Their mission is the conservation and understanding of the large predators and other key wildlife species that determine the course of all conservation in Africa. They are the founders of the Big Cats Initiative with National Geographic, which currently funds 65 grants in 23 countries for the conservation of big cats. The Jouberts have made over 25 films for National Geographic, published 11 books, half a dozen scientific papers, and have written many articles for the National Geographic Magazine. Their films have received eight Emmys, a Peabody, Wildscreen Panda Awards, and a Lifetime Achievement Award at the Japan Wildlife Film Festival.

Once Was Water
Scroll to top