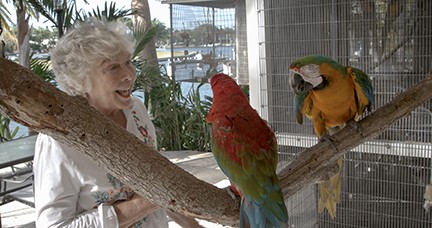 Parrot lover and conservationist Daria Feinstein is on a mission to protect one of Miami’s most spectacular wild residents: the Blue-and-yellow Macaw. Indigenous to Central and South America, these colorful parrots were introduced into Miami in the mid-20th century, and have since established a small but well-beloved breeding population in the city. Today, however, their numbers are crashing as poachers capture the macaws and their chicks to sell them into the lucrative pet trade.

Read Daria Feinstein’s plea in the Miami Herald to stop the poaching of wild Macaws in South Florida.

Neil Losin is a biologist, photographer, and filmmaker based in Miami, FL. He was named a National Geographic Young Explorer in 2009 while studying invasive lizard in Florida and Puerto Rico. Neil received an NSF Graduate Research Fellowship and earned his Ph.D. in UCLA’s Department of Ecology and Evolutionary Biology in 2012. He’s an incorrigible birdwatcher and can juggle more objects than you’d think. Neil cofounded Day’s Edge Productions with Nate Dappen in 2012.

Plastic Pollution and the Pristine Arctic
Scroll to top