A urologist from Florida on a mission to save the planet “spreading the gospel of vasectomy”. A modern day Don Quixote; part dreamer and part visionary committed to the impossible quest of lowering population on the planet, one vasectomy at a time. Dr. Doug Stein travels to Haiti, the Philippines and throughout the state of Florida, tirelessly advocating for men to take responsibility for family planning. While the mathematical absurdity of his vasectomy mission haunts his every procedure, the questions Doug raises about the future of humankind are critical to our collective wellbeing.

Get the facts about World Vasectomy Day here.

Language: Mostly English with some Tagalog, Haitian and Creole with English subtitles 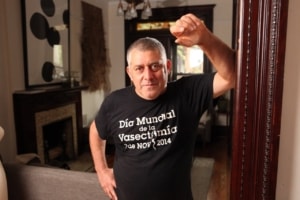 Jonathan Stack is a multiple Emmy Award-winning and two-time Academy Award® nominated documentary filmmaker. His work has been distributed by networks throughout 100 countries including HBO, BBC, A&E, Channel. For Jonathan, far from the story ending when the lights come on, the end of the movie is the beginning of Act III, in the communities from which they come. He has overseen and developed educational programs that combine television production company and network at Angola prison. In each instance, Jonathan is acutely aware of using ‘media assets’ to build audience and energize political campaigns. He is now co-founder of World Vasectomy Day.

The Sound of a Wild Snail Eating