Backyard Wilderness will surprise and entertain viewers with the unexpected wonders of nature that are right under our noses and in our own backyards. Spanning a seasonal year around a suburban home, the film displays a stunning array of unique wildlife images and behavior—all captured by cameras mounted inside dens and nests, and moving along the forest floor and pond bottom, to reveal its inhabitants in rare and breathtaking intimacy. We follow Katie, a young girl, and her modern family living next to the woods who are blind to the real-life spectacle around them, absorbed by an array of electronic devices in their busy lives. Katie gradually discovers the intricate secrets that nature has hidden so close to her front door and we experience the joy she finds in her interactions with this new world. The film reminds us that Wi-Fi is not the only connection that matters and that sometimes in ordinary places, you can uncover extraordinary things that could transform you forever—you just need to step outside. 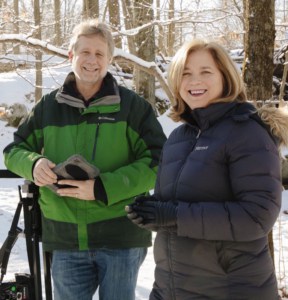 Andrew Young and Susan Todd, Directors and Producers for Backyard Wilderness, are Academy Award nominees and Emmy Award winners. Young was also the director of photography for the film and, with a master’s degree from Yale University in physical anthropology, he brings extensive experience in science and animal behavior to his world class cinematography. As co-founders of New York-based production company Archipelago Films, they have created groundbreaking media about the most urgent social and environmental challenges of our time.

At Archipelago Films, they collaborated on both documentaries and fiction work with HBO, Cinemax, National Geographic, the BBC, and PBS. Todd has worked previously as a producer at PBS WNET, holds a masters in journalism from Columbia University, and studied filmmaking at Harvard University.