We deeply thank everyone who helped make 2017 such a successful and engaging year for ACFF – our filmmakers, audience members, donors, and community partners.  Please take a look at our accomplishments for 2017, and, with your help, what we hope to do in 2018. 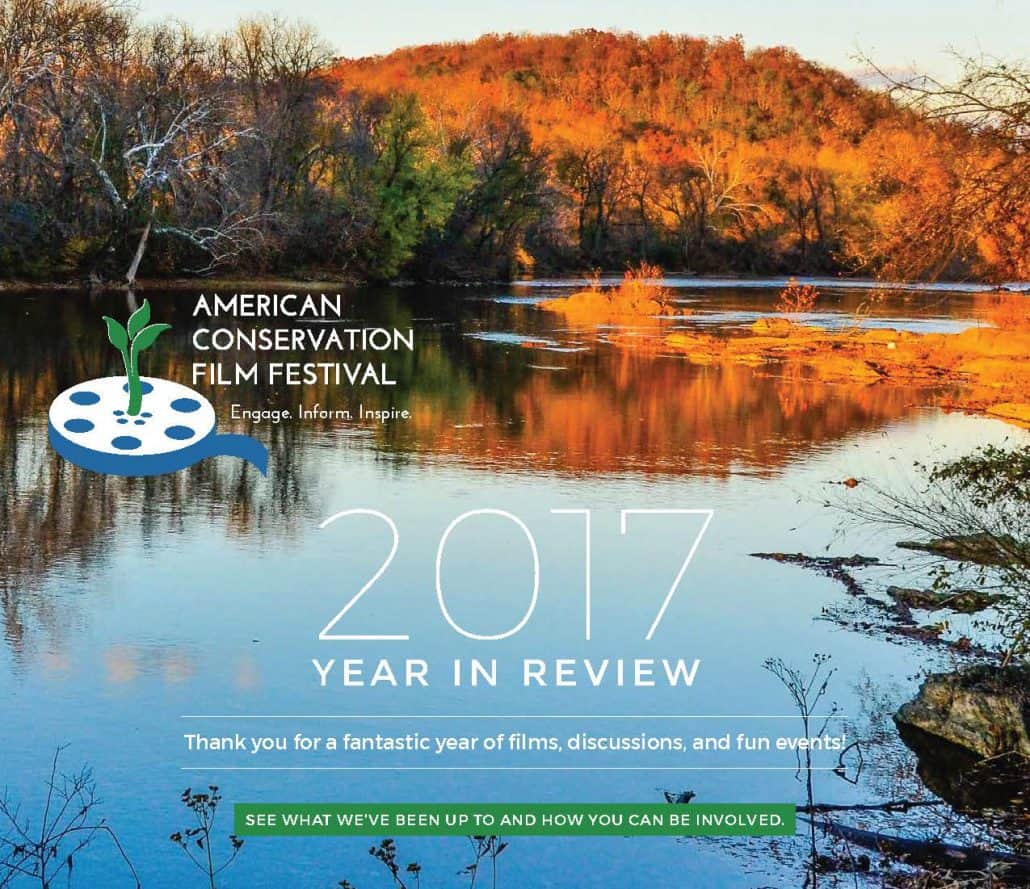 The mission of the American Conservation Film Festival is to promote outstanding films and the arts to educate and inspire people to become engaged in conservation issues.

*Provide a venue for diverse conservation films that rarely receive a wide showing; Celebrate conservation film and video in the vibrant atmosphere of historic Shepherdstown, West Virginia;
*Showcase independent, international, student, and regional films;
*Offer an educational component that complements film selections and supports those interested in conservation filmmaking
*Support emerging filmmakers as they are beginning their careers;
*Engage and involve youth in conservation issues.

Selected and screened 46 of the most compelling, diverse, and beautiful films from around the world to present over two weekends of the Festival. Film topics included environmental activism, wildlife preservation, faith and earth stewardship, water quality, climate change and the military, and more.

Welcomed over 20 filmmakers and special guests, including five student filmmakers, to share their films, perspectives, and expertise with audience members.

Hosted a Festival Kick-off party at Popodicon, the President’s house at Shepherd University, to welcome filmmakers, sponsors, and lead donors to the festival, followed by a special free screening and program on From the Ashes at The Frank Center.

Offered a full second weekend of the Festival to present an encore of the eight award winners and three films not screened on the first weekend.

Offered free admission to all students 18 or younger and Shepherd University students, staff, and faculty at all film blocks.

Held a spring fundraiser at Wild Goose Farm in Shepherdstown, featuring the film Ghost in the Making: Rusty-patched Bumble Bee, followed by discussion with three pollination experts: the director of the Endangered Species Coalition, a local pollinator-specific horticulturist, and the former national botanist for the US Forest Service.

Hosted Best of Fest special movie screenings at the Weinberg Center in Frederick, Maryland and Barns of Rose Hill in Berryville, Virginia, with a total of over 350 people in attendance.

Launched the Next Gen Capture Conservation Contest to engage and encourage students 18 and under to create and submit their own short videos about their relationship to nature and the environment.

Partnered with the Shepherdstown Film Society for a special film screening of The True Cost and a preview of 2017 festival films.

Established the ACFF Conservationist Fund in honor of ACFF’s 15th Anniversary to create an ongoing financial support system made up of ACFF donors who have pledged $1,000 or more.

“Because of the workshop, I feel plugged into a community of talented, kind, supportive, inspiring filmmakers and people working in conservation media that before felt so distant and separate from my work.” ~Conservation Filmmaker Workshop participant

“Your event always has so many special touches… I love the mixture of young and old as we all join together in your tireless efforts.” ~Spring Fundraiser attendee

“I loved “SEED: The Untold Story” and was so appreciative to have the opportunity to see it in Berryville! It makes me want to start my own personal seed bank!” ~Best of Fest attendee

“It was a high honor for me to have a role in this beautiful and important festival.” ~Festival guest speaker

“The speakers and discussions were thoughtful and continue to inspire us in the ways we can be better citizens of the planet. This inspiration is what keeps me involved and returning to ACFF. Your hard work paid off in spades as this was the best ACFF I have attended. “ ~ Festival audience member, donor, and volunteer

ACFF is in a dynamic, evolving time as we continuously aspire to have a profound and positive impact on our community and the planet, engage people of all ages and backgrounds in a myriad of conservation issues, and empower and support filmmakers in making films that make a difference.

With the support of individuals, businesses, foundations, and community partners, we can:

There has never been a more critical time to support organizations doing work to protect our environment, further scientific study, and raise awareness on conservation issues.

We hope you recognize the important role ACFF plays in this picture and will support us with your donation of any amount.

All donations made since the festival will be matched dollar for dollar, up to $5,000, thanks to a generous challenge match from one of our Conservationist Fund members.

We are very grateful for the generous support of so many sponsors, grantors, community partners, and individual donors who make what we do possible. Thanks to the following sponsors of the 2017 Festival.

Best of Fest 2018 at the Weinberg
Scroll to top