WASTED! THE STORY OF FOOD WASTE aims to change the way people buy, cook, recycle, and eat food. Through the eyes of chef-heroes like Anthony Bourdain, Dan Barber, Mario Batali, Massimo Bottura, and Danny Bowien, audiences will see how the world’s most influential chefs make the most of every kind of food, transforming what most people consider scraps into incredible dishes that create a more secure food system. WASTED! exposes the criminality of food waste and how it’s directly contributing to climate change and shows how each of us can make small changes – all of them delicious – to solve one of the greatest problems of the 21st Century.

Action Opportunities
Buy only what you will use.  Use the food you have and save the food you haven’t used by preserving it before it deteriorates.
You can order several great books from our local bookstore, Four Seasons.  Check out these:
Waste Not, Want Not Cookbook by Cinda Chavich
Preserving Food without Freezing or Canning by Gardeners and Farmers of Centre Terre Vivante, Deborah Madison and Eliot Coleman
Fiery Ferments: 70 Stimulating Recipes for Hot Sauces, Spicy Chutneys, Kimchis with Kick and Other Blazing Fermented Condiments by Kirsten K. Shockey and Christopher Schokey

Compost the food you haven’t used or saved.  Sign up for a master composter course right in our own community, taught by Melanie Files and Rick Lowman.

Check out this recipe from Tonic Herb Shop for bone broth provided for tasting after the screening of Wasted.  It encourages the kind of nose-to-tail meat use advocated in the film and is a great way to use leftover veggies in the crisper drawer. 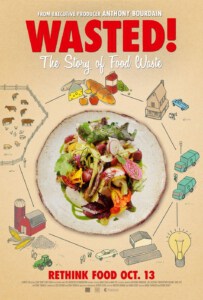 Anna Chai is an Emmy Award-winning director and producer known for her work on the James Beard Award-winning series, The Mind of a Chef, The Layover with Anthony Bourdain, and This American Life. Anna received a BA in documentary filmmaking from Harvard University. WASTED! The Story of Food Waste is her first documentary feature.

Nari Kye is an Emmy-winning producer at Zero Point Zero with a degree in film and television production from New York University’s Tisch School of the Arts. For the past 12 years, she’s worked on critically acclaimed, groundbreaking series, such as Anthony Bourdain: No Reservations, Gourmet’s Diary of a Foodie, The Layover, The Getaway, and Parts Unknown.

Walk on the Mountain